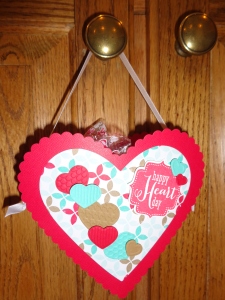 “The best and most beautiful things in the world cannot be seen or even touched – they must be felt with the heart.”

Good Morning from Stamping Peace.  We made this fun project at my friend Beth’s stamping event last week-end at the Pembroke School in Downeast Maine.  It was made with the Hearts framelits and the smaller hearts were made with the Fashionable Hearts Embosslit.  We’ll be making this at our next stamping classes.  Get ready to choose your designer paper  ladies (and men…we have a man stamper at Stamping Peace!)  : )

Have fun stamping this week-end, 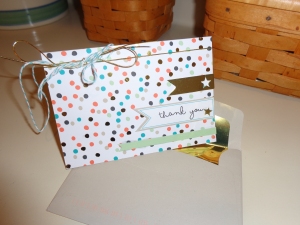 “If the only prayer we ever say in our entire life is ‘thank you’ it will be enough.”

Thank you for visiting Stamping Peace.  This little piece of shininess was made by my niece and is from a kit offered as a free product for Stampin’ Up!’s “Sale-A-Bration.”  All the little dark dots and the dark banner in the picture are actually gold, so you can’t really see how cute it is…it’s small, too (3 1/2″ x 5″), which adds to the cute factor.  : )  The “Good As Gold” kit comes with all the pieces to make 8 cards…a great choice for our freebie! (Clicking on the picture will enlarge it). 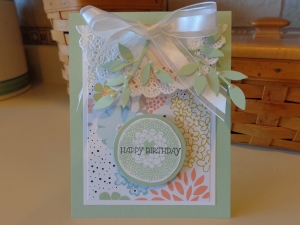 “Life is the greatest bargain ~ we get it for nothing.”

Welcome back to Stamping Peace.  Yesterday began Stampin’ Up!’s annual Sale-A-Bration, which runs until March 31st.  We can:

SHOP – We can choose one of the exclusive products offered with each $50.00 purchase. (Stamping Peacers…your Sale-A-Bration catalog is in with your January order).

JOIN – Sign up to be a new demonstrator and you will get $150.00 in products of your choice for $99.00.  This is the best time of the year to join if you have been thinking of it.  You can even join as a “Hobby Demonstrator” which means that you do not have to hold parties or classes, but can get a 20% discount on your orders (30% on your first order).  Miss Pat, Beth, Linda, Terry and I would love to have you join our team!  : )

Today’s card, which is a variation of a Beth Beard design, uses some of the products available for free with a $50.00 order.  The flower stamp on the front of the card is part of the “Petal Parade” stamp set (5 stamps), and the designer paper is one of 12 pieces of double sided 12″ x 12″ “Sweet Sorbet” paper.  Sale-A-Bration is a great bargain all around! 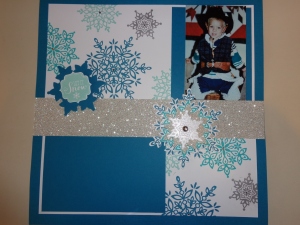 “You seem to be an intelligent fellow, Josh.”

-Joseph Girzone from Joshua, A Parable for Today

Happy Birthday Josh!  Twenty four years ago today I had a baby.  : )   When he was 16 wks. in utero, I had an AFP test that indicated a problem.  An ultrasound discovered that his bladder was ten times the size of his head and arms and legs couldn’t be seen.  Our doctor advised abortion.  We went to a neonatal specialist from Brown University and he also recommended abortion.  He said the baby would either die before birth or within four days of birth from renal failure.  The baby had a blockage in his bladder, had drunk all the amniotic fluid (which is normal) and it couldn’t get out.  I came home from that appointment and sat on our cellar stairs and cried while Tim was giving Jonathan a bath.  As I sat there, it came to me that the baby’s name was Joshua.  I went and got the baby name book and looked it up.  Joshua means “God saves.”  I went into the bathroom and told Tim that the baby’s name was Joshua.  When Josh was born, on a Superbowl Sunday, he was 5 1/2 weeks early, but weighed 6 lbs.  He was born with Prune Belly Syndrome, which meant no stomach muscles and a bladder that didn’t work.   A medical team was flown up from Boston, they took him by helicopter and two days later he had double ureterostomies (two holes in his stomach for urine to flow out of).  At age 5 he had the holes closed and had a stoma in his bellybutton, through which I catheterized him every two hours around the clock for 9 months.  After that, his bladder worked!  : )  At age 9 he had a kidney transplant because when he was in utero and had drunk all the amniotic fluid, it had backed up through his ureters and damaged his kidneys.  But today, at age 24, he is healthy, working full time and has a lovely girlfriend.  Yay, Josh!  : )  That is him, in the picture above, on a beautiful scrapbook page that I made at my friend Beth’s stamping event last week-end.  We used the Festive Flurry Stamps and the Let it Snow stamp from the “Best Of” series of stamps.  Thanks, Beth, for the gorgeous project, and again, Happy Birthday Josh!

This is the Merry Monday Challenge that came out today.  I haven’t made a card yet because I have shingles and slept the entire day away!  We have until next Sunday to make the card, though.  Friends Mimi and Terry have joined in the fun, but aren’t posting their cards.  Anyone else want to try it?  : )

Sending you some merry, 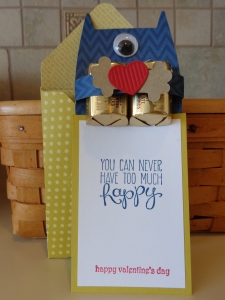 “Most folks are about as happy as they make up their minds to be.”

Good Morning…hope you had a great week-end!  If you saw our post on Friday, you saw these cute little monster Valentine’s that are made from a Stampin’ Up! kit.  We stepped it up a notch by adding a little card to the monster’s feet (a Brian King design).  A coordinating envelope made with the Envelope Punch Board and someone is going to receive a little piece of happy.  : )

Quick story…we stayed at Maine Maritime Academy Friday night with the Boy Scouts…250 men and boys, and me…did I ever feel safe!  (Actually, I did see two other women at one point.)  Everyone was bunked down in the field house with sleeping bags.  The lights went out at 10:00 p.m.  On went all the boys flashlights and a lot of chatter for about 30 mins.  It got quiet and then one troop started singing “Silent Night” very quietly.  At the end of the song, all of the other boys burst out in a quiet applause.  Then there was total silence and they all went to sleep.  It was the most incredible thing.  I kept thinking what an amazing group of good men and boys were gathered there.  Yay, Scouting!!!

Have a great day, 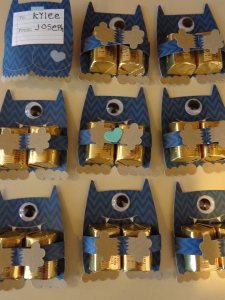 “True love begins when nothing is looked for in return.”

Good Morning…there are a lot of eyes on you today!  While Joseph has been home from school this week, he has made these little guys from a Stampin’ Up! kit.  He still has to add all the hearts, but  aren’t they cute.  : )  The kit comes in blue or pink, and makes 18 Valentines.  A great project for all ages!

Hope you have a nice week-end.  We’re off for an overnight at Maine Maritime Academy for the annual Boy Scout Klondike.  Yay, frozen fun!